Logistic Regression models the probability of an event happening or not.  This means the observations are binary and only exist in one of two states.  For example, pass or fail an exam, win or lose a game or perhaps recover or die from a disease.  As we have said, the dependent variable is binary and has two possible values which we can represent by the values 0 and 1.  The independent variable is often a continuous value.  We can therefore illustrate this with a simple example.

Image we have a group of 20 students who sat an exam.  They all revised for the exam but some spent more time on revision than others.  Not all students are equal and so the time spent on revision is not the only deciding factor.  However, can we say that there is a correlation between revision and success?

Note how study time is continuous because it could be any value in the revision range. The result is obviously binary because we only consider the two values of pass and fail. However, you might note that two students studied for 1.75 hours.  One of them failed and one passed.  For this reason we can say the observed probability of passing with 1.75 hours of revision is 0.5.  This is why although the variable is binary the input to the problem can appear to be continuous as we can allocate probabilities. This is a typical candidate for logistic regression.

Note how we put in two dots for 1.75 hours of revision. One at 1 and one at 0.  We could easily have put a single dot at 0.5 to show the probability of a pass instead of the actual results.  If at 1.75 hours we had two passes and a fail the probability value would increase to 0.666.

Our objective therefore, is to calculate a single continuous function or logistic regression, that shows the probability that the outcome is a pass depending on study time. The curve cannot go below zero nor can it go above 1.  The curve approaches the lower and upper values asymptotically.  In the chart the blue line is the fitted logistic regression for the table of 20 students. Whereas, the red line is the logistic regression when we have 81 failures at 3 hours revision time.  The observed probability at 3 hours is zero in both cases but the density of that observation changes and it has a lot more weight in the red line.

A Revision of Probability and Odds

If we know that the probability of an event happening is 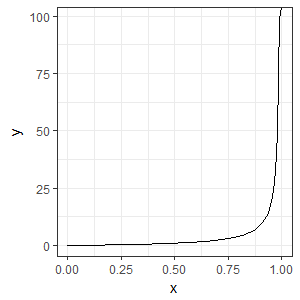 Neither probability nor odds are easy functions to work with. The problem with probabilities is that they cannot go below 0 or above one. A linear mathematical model might forecast a value outside of this range which would not make sense. Odds approach

as the probability approaches one.

What we want for our logistic regression is a function which is easy to work with and can form the basis of a model.

The answer comes by taking logarithms of the odds.

We notice that we now have a value that is continuous and is symmetric around even odds at a probability of 0.5.  We can also see that if we had a model that calculated the logarithm of odds (y) we could convert this to a probability that would be guaranteed to be between 0 and one no matter what the value given be the model.  So log odds have given a solution to breaking the boundaries of probability but they are useful for other reasons too.  The logarithm was invented to replace multiplication with addition. This is because:

Suppose then we wanted to improve the odds of something occurring and we wanted our odds to be 10% higher. When we consider the logarithm of odds instead of multiplying the odds by a factor of 1.1 we would add the log of 1.1 which is constant.

This, therefore, gives us an idea for modelling the student exam problem with a logistic regression. Suppose we consider that if a student does no revision at all there is a base probability (or odds) of passing

. Then what if we imagine that for every hour of revision that they do the odds improve by a fixed factor

).  Our odds improve to  become

.  If we did a second hour of revision we improve our odds by another 10% so our odds would be

which is a linear model. This tells us that we might be able to transform our data, fit a linear model and then transform back to give us a probability function, in other words, the logistic regression.

When a patient is put in intensive care the doctor will calculate a risk score called Apache II (Acute Physiology, Age, Chronic Health Evaluation). Patients with higher scores are more likely to die.  From now on we will use some Apache II data to show how a logistic regression might work. 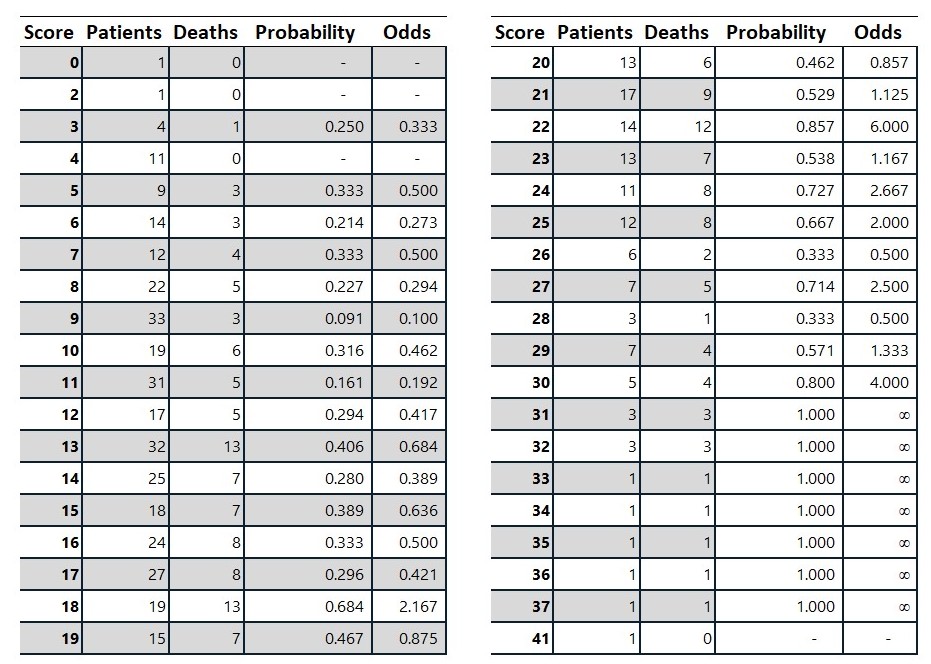 We can plot the logarithm of the odds on a chart and use linear regression to fit a line. Note that in this example we ignored the infinite odds when fitting the linear model. 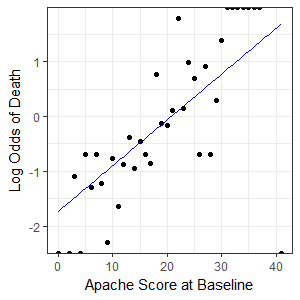 The fitted linear model was

Now we have a linear model we can find a function for probability in terms of x. 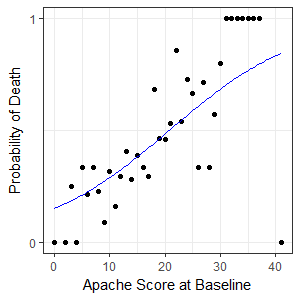 The method we used required us to transform the data to something that should be linear and then we fitted a linear regression line. This is not the preferred way to do a logistic regression and we will now discuss the better approach. The table above has 454 patients sorted into 38 populations depending on their score.  The populations range in size from having one observation to 33 observations.

Where the binomial coefficient is given by:

We are trying to fit a linear model to the logarithm of the odds so we also have:

Now that we have these functions we can consider what our evidence means. We have 38 independent populations. Let

be a vector with elements

representing the number of observations in population

is our “Patients” column in the table. Now let

be a vector where each element

represents the observed counts of deaths for each population – Our “Deaths” column. Let

be a vector where each element

Our logistic regression model will calculate

a vector (also with 38 elements)

, in other words, the probability of death for the score in the

population. The model finds a linear approximation to the logarithm of the odds.

The likelihood that our model parameters

are correct given our observations y is:

by finding the maximum of this function given our population sizes

The maximum value can be found using calculus. It occurs when the first derivative is zero and the second derivative is negative. Before we do that let us look at a chart of the likelihood for a range of values for

using a contour plot to show the maximum value (in red): 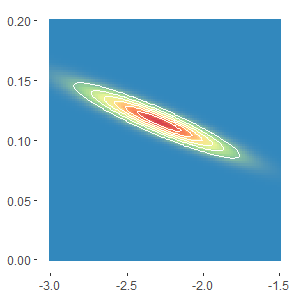 is on the x-axis and

on the y-axis.  We can see that the function is continuous and seems to be well behaved.  It looks like there is a single maximum value around {-2.3, 1.1}.

This next part of the analysis is not very easy and we need to be quite imaginative in how we approach the problem.  The first observation we make is that the binomial coefficients are independent of

and so are independent of the model parameters.  This means that they are not relevant to the derivative as they are essentially constants.  The model equation tells us that:

We can then simplify:

So we can substitute in the model:

We now take partial derivatives with respect to

and set the equations equal to zero.

We can also plot these two functions on the plane

. This chart is colored to show positive values in red and negative in blue. The two lines show the values of

that give zero in each of the two partial derivatives functions above. Although their slope is very similar we can see that there is a single point of intersection that will give the greatest likelihood for our observed results. 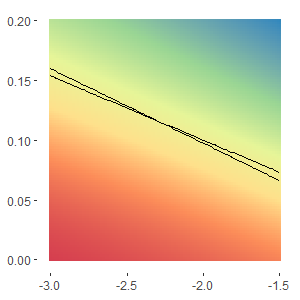 So we now have a relatively simple formula that we need to solve. Unfortunately it is not a series of linear equations and so we will need to use a numerical method, the Newton Raphson iterative approach. The generic formula for finding

The approach extends into higher dimensions using the Jacobian matrix as follows:
Let

So the Jacobian matrix can be expressed quite simply as:

If we look at the two formulae that we derived for

they are very similar. They only differ by an

term. We can also see that the terms in the Jacobian also only differ by the same term

The formulae that we wish to solve for zero can be written as the product of this matrix and a vector:

We can also write the Jacobian matrix very simply as:

where W is an i by i square diagonal matrix constructed as follows:

We start by setting

and then we calculate the terms of the Newton Raphson iteration:

, the inverse of matrix

.  However, in our example we only need four iterations to complete the calculation. 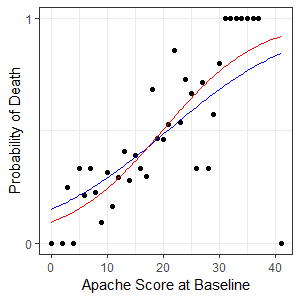